Anti dispersibility is an important technical index to measure the quality of anti dispersing agent. HPMC is a water-soluble polymer compound, also known as water-soluble resin or water-soluble polymer. It increases the consistency of the mixture by increasing the viscosity of the mixing water. It is a hydrophilic polymer material that can be dissolved in water to form a solution or dispersion. It can be seen from the experiment that when the amount of naphthalene superplasticizer increases, the addition of superplasticizer will reduce the dispersion resistance of fresh cement mortar. This is because naphthalene series superplasticizer is a surfactant. When the superplasticizer is added to the mortar, the superplasticizer is oriented on the surface of the cement particles so that the surface of the cement particles has the same charge. This electric repulsion force causes the flocculation structure formed by the cement particles to be disassembled and releases the water wrapped in the structure, which will cause the loss of some cement. At the same time, it is found that with the increase of HPMC content, the dispersion resistance of fresh cement mortar becomes better and better.

(1) The addition of HPMC has an obvious retarding effect on the mortar mixture. With the increase of HPMC content, the setting time of mortar is extended successively. Under the same HPMC content, the setting time of mortar formed underwater is longer than that of mortar formed in air. This feature is advantageous for underwater concrete pumping.
(2) The fresh cement mortar mixed with hydroxypropyl methyl cellulose has good cohesiveness and almost no bleeding.
(3) The content of HPMC and the water demand of mortar decreased first and then increased obviously.
(4) The addition of water reducing agent improves the problem of increasing water demand of mortar, but its amount must be controlled reasonably, otherwise, the underwater dispersion resistance of fresh cement mortar will be reduced sometimes.
(5) There is little difference in the structure between the cement paste specimen mixed with HPMC and the blank specimen, and there is little difference in the structure and compactness between the cement paste specimen cast in water and cast in air. The specimen formed under water for 28 days is slightly loose. The main reason is that the addition of HPMC greatly reduces the loss and dispersion of cement when pouring in water, but also reduces the compactness of cement paste. In the project, the amount of HPMC shall be reduced as much as possible under the condition of ensuring the effect of underwater non dispersion.
(6) HPMC underwater non dispersible concrete admixture is added, and controlling the mixing amount is beneficial to the strength. The pilot project shows that the strength ratio of concrete formed in water to that formed in air is 84.8%, and the effect is significant. 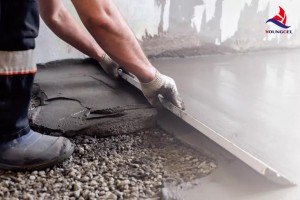