Function and application of cellulose ether in ready mixed mortar

Cellulose ether mainly has the following three functions:
1) It can thicken the fresh mortar to prevent segregation and obtain a uniform plastic body;
2) It has the function of air entrainment and can also stabilize the uniform small bubbles introduced into the mortar;
3) As a water retaining agent, it helps to keep the water (free water) in the thin layer of mortar, so that the cement can have more time for hydration after mortar construction.
In dry mixed mortar, methyl cellulose ether plays a role in water retention, thickening and improving construction performance. Good water retention performance ensures that the mortar will not cause sand, powder and strength reduction due to water shortage and incomplete cement hydration; The thickening effect greatly enhances the structural strength of wet mortar, such as the good anti sagging ability of tile adhesive; The addition of methyl cellulose ether can obviously improve the wet viscosity of wet mortar, which has good viscosity to various substrates, thus improving the wall performance of wet mortar and reducing waste.
When using cellulose ether, it should be noted that if the amount of cellulose ether is too high or the viscosity is too high, the water demand will increase, and the construction will be difficult (plastering) and the workability will be reduced. Cellulose ether can delay the setting time of cement, especially when the dosage is high. In addition, cellulose ether will also affect the opening time, vertical flow resistance and bond strength of mortar.
The appropriate cellulose ether should be selected in different products, and its functions are also different. For example, MC with higher viscosity should be selected in ceramic tile adhesive, which can extend the opening time and adjustable time, and improve the anti slip performance; MC with lower viscosity should be selected in the self leveling mortar to maintain the fluidity of the mortar, and it also plays a role in preventing delamination and segregation and water retention. The appropriate cellulose ether shall be determined according to the manufacturer’s recommendations and the corresponding test results.
In addition, cellulose ether has a foam stabilizing effect, and the early film formation will cause mortar scaling. The microstructure of cellulose ether in newly mixed and hardened ceramic tile adhesive was studied by the University of Bern and National Starch Chemical Company in Switzerland. The field test shown in Figure found that cellulose ether stabilized bubbles in fresh mortar through film formation. These cellulose ether films may have been formed during or just after stirring, and the re dispersible rubber powder has not yet started to form films. The essence behind this phenomenon is the surface activity of cellulose ether. As bubbles are brought in by the agitator in a physical way, cellulose ether quickly occupies the interface between bubbles and cement slurry to form a film. These films are still wet, so they are very flexible and compressible, but the polarization effect clearly confirms the orderly arrangement of their molecules. Later, these cellulose ether films can be found at the edge of the pores under the scanning electron microscope, as shown in Figure .
As cellulose ether is a water-soluble polymer, it will migrate to the surface where the mortar contacts the air with the evaporation of water in the fresh mortar to form enrichment, resulting in the skinning of cellulose ether on the surface of the new mortar. As a result of skinning, a relatively dense film is formed on the mortar surface, which will shorten the opening time of the mortar. If the ceramic tile is pasted on the surface of the mortar at this time, the film will also be distributed to the interior of the mortar and the interface between the ceramic tile and the mortar, thus reducing the bond strength in the later period . The skinning of cellulose ether can be reduced by adjusting the formula, selecting suitable cellulose ether and adding other additives. 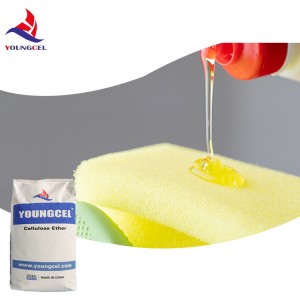 Our products are popular in Egypt, Russia, South Africa, the Middle East, turkey, Vietnam, France, Italy, Singapore, Bangladesh, Indonesia, South America and so on. Thanks in advance and welcome to contact.